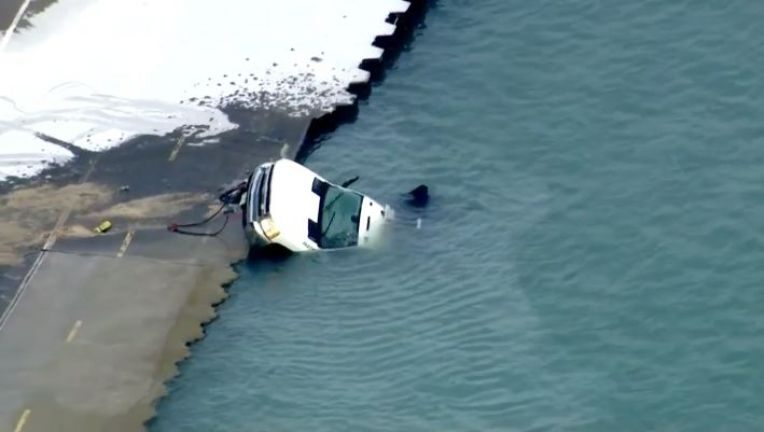 “One second, a Chicago Park District crew was headed down the Lakefront Trail in a truck, spreading salt.

The next, the truck was sliding right into the lake. And the two Park District employees were fortunate enough to make a last-second escape.

The accident happened near the Oak Street Beach just before 7:15 a.m.

With a second to spare, they both jumped out of the truck. Almost immediately afterward, the truck tipped hard back into the water.

“As you can see out here, it’s like a sheet of glass right now,” Deputy District Fire Chief of Marine Dive Operations Jason Lach said of the conditions on the lake Wednesday morning.

When the truck rolled into the water, everything but the hood and windshield were submerged.

The drivers stayed largely dry, and largely safe. Officials said a 46-year-old man was transported to Northwestern Memorial Hospital with abrasions to the face and lip. The other man, 45, was not injured.

The minutes that followed were a scramble.

Dispatch reports indicated that there were also cyclists who were sliding on the path, and first responders were concerned that someone else would end up in the water if the path were not blocked off.

Meanwhile, Lach said if the Park District pair had not jumped quickly, they “could have become hypothermic; a lot of other things could’ve happened.”

First, a team of 12 from Wes’s Service Towing descended – salting, strategizing, and eventually extricating the truck – which still had its wipers on as it was pulled vertically from the lake.

Meanwhile, traffic backed up on Lake Shore Drive and didn’t clear until around noon.

Wes’s Service Crews waited to tow the truck out of the water until the ice and snow on the Lakefront Trail melted, so as not to risk having the tow truck end up in the lake as well.

The other thing that happened was a perfect weather storm. At Oak Street and the lake, Lake Shore Drive makes a hard turn and runs east-west for a short distance, creating stiff wind pockets.

And with water levels in the lake six feet higher than six years ago, and nearly a foot and a half higher than even last year, the conditions for an icy skid were ripe.

“This curve right here is a tight corner for weather this time of the year,” Lach said. “We get a lot of ice and buildup out here.”

It was asked why crews salt running paths in such cold weather. The answer was that the paths still get used quite a bit regardless.

“This incident underscores the importance of being aware of rising lake levels and icy conditions particularly during the Winter months,” the Chicago Park District said in a written statement. “We continue to urge the public to adhere to advisories and respect closures along the lakefront.”

We also asked the city if any policies will change as a result of the accident. We were still waiting to hear back late Wednesday afternoon.”